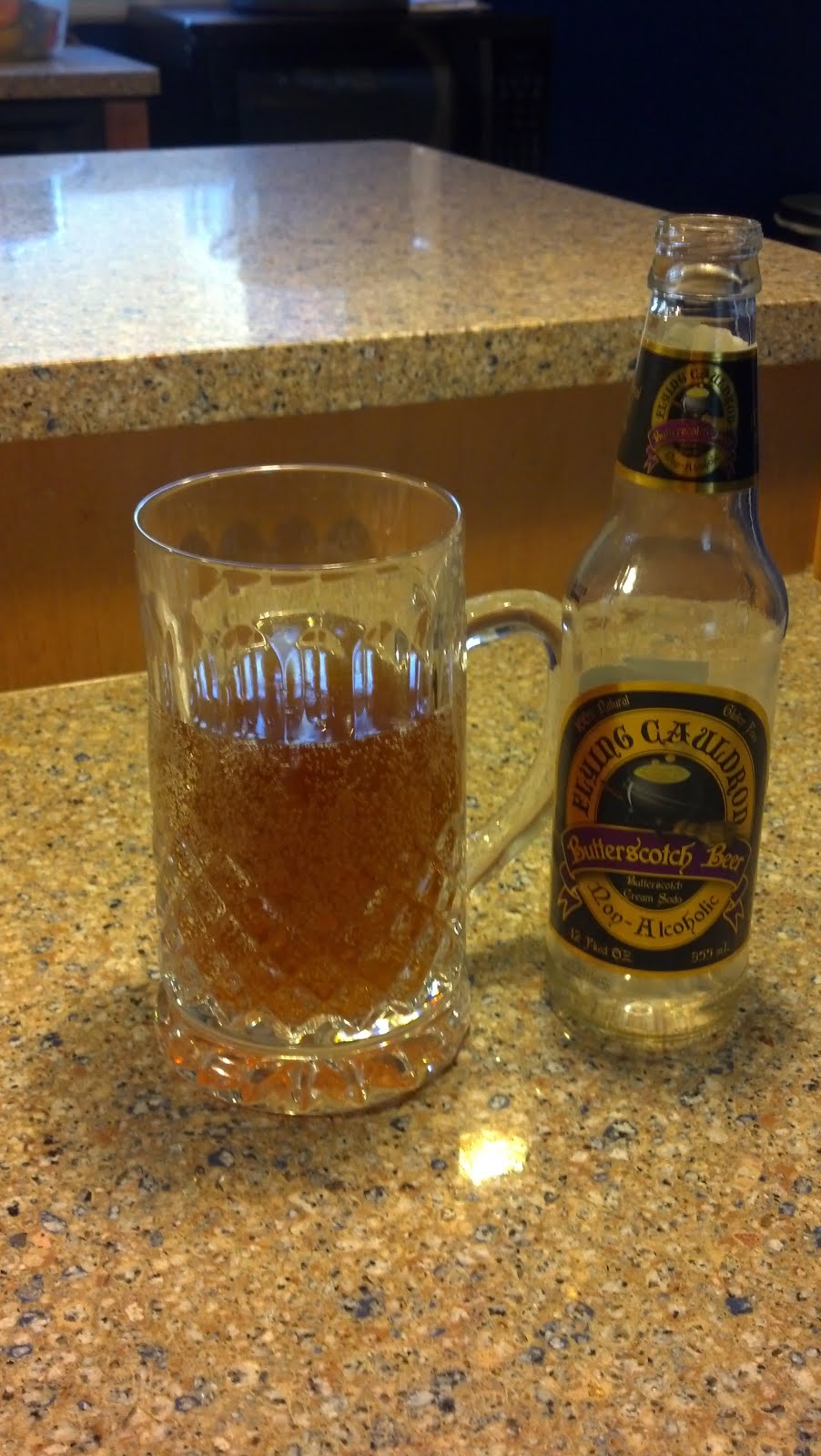 I could hardly believe my eyes: there on the shelf of my local supermarket was a four-pack of “Flying Cauldron Butterscotch Beer”. Could this really be the beverage I came to love during my single ill-fated (and completely accidental) semester at the Hogsbreath school for under aged wizards? Or was it just an unauthorized knock-off that would surely get its creators dragged off to Azerbaijan Prison by demontors?

I grabbed a four-pack and suddenly felt the sensation of being pulled from the inside by my navel, and I clutched the bottles close just in time to be dashed hizzy-tizzy though the flu network. Moments later I found myself in front of the fireplace of a familiar-looking hut. Standing before me was an equally familiar giant of a gamekeeper.

“Well, look who it is!” he said. His grinning teeth were the size of saltine crackers, framed by a bushy black beard. “It’s been decades! What are you doing here?”

“Hangrid!” I said, dusting myself off. “I think these bottles might be responsible for my visit.” I held up the Butterscotch Beer. Hangrid cocked one eyebrow and grabbed the carrying case with his pinky.

“Innerestin’,” he said. “I never s’posed the Flying Cauldron would export one of its most famous–and valuable–recipes.”

We examined the packaging together. All the facts looked right: the very wizardly-looking layout stated that it was a “100% Natural” “Non-Alcoholic” “Butterscotch Cream Soda” that has been brewed by the famed Flying Cauldron brew pub since 1374 (which is, of course, in Hogsbreath, England). Curiously, there was a REEDSGingerBrew.com URL on the side of the cardboard pack, and on the bottom were adverts not only for Reed’s Ginger Brews, but also for Virgil’s Root Beer and related products.

Hangrid picked up a purple umbrella, waved it a wooden table, and two frosty crystal mugs appeared. “Sorry,” he said. “I din’na mean to show off, what with your…you know…um…”

“My complete lack of magical ability?” I said.

“Yes, that–oh, look! The bottles are open!” said Hangrid as he passed me one of the chilled clear glass bottles.

The rich amber liquid poured out smoothly, and little bubbles formed at the bottom and sides of the mug. It never quite formed a head, but did sparkle invitingly.

“Looks like the real thing to me,” I said.

We clinked our mugs together. Hangrid downed his in one quick gulp; I decided to take a measured first sip. The sweetness and rich butterscotch flavor worked in concert to immediately saturate my palate. To those who’ve never experienced the brew, it’s not as thick on the tongue as you might imagine, which is surprising given how sweet it is.

“How do you suppose they manage that?” I mused to Hangrid, who lifted his umbrella and bellowed out “stevia rebaudiana!” I ducked under the table, anticipating disaster. I might be a complete moggle with zero wizarding skills, but Hangrid has just enough to be dangerous.

“What kind of spell was that supposed to be?” I asked.

“Oh, it was no spell,” he said. “I was just reading the Nutrition Facts. Look!”

Sure enough, in addition to being sweetened with unbleached cane sugar, the last ingredient was stevia leaf extract–the current all-natural “it” sweetener (and a little bit goes a long way). Which is probably also how 12 fluid ounces of such a sweet drink can only tally 120 calories. Magic indeed!

As I drank down the rest of my mug, the flavor remained fresh and delicious all the way to the end–velvety butterscotch from start to finish, and the flavor even lingered for a few beats after it had vanished.

“Well now,” said Hangrid as he teed up the other two bottles. “It seems like the real thing to me. And if it’s not…well, I don’t care.”

“I couldn’t have said it better myself,” I said. We hoisted our glasses. “Here’s to Harrie, Harmonium, and Ron Wesley, wherever they may be!” And the rest of the afternoon passed in a happy blur.

So if you’re looking for a beverage that will transport you to a magical world–or if you just really like butterscotch–then Flying Cauldron could be your beverage of choice.

At least until K. J. Rawlings’s legal team shuts it down.

This entry was written by Paul and Storm and posted on January 31, 2014 at 1:39 pm. Bookmark the permalink. Follow any comments here with the RSS feed for this post. Trackbacks are closed, but you can post a comment.